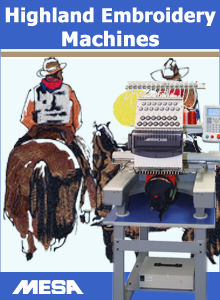 MESA Distributors was incorporated in 1993 by owner and President, James Buck. In a very short time, MESA became a leading distributor of pre-owned embroidery machines.

In 1997, MESA became a distributor for SWF brand embroidery machines. At the time, the SWF was brand new to the US market, but thanks again to the hard work of James Buck and other MESA employees, SWF soon became a leading brand of embroidery machines in the US.

Excited by the new possibilities of direct to garment printing, in 2004 MESA became a distributor for Fast T-Jet brand printers, when dtg printing was still in its infancy.

Since those early years, MESA has continually expanded and improved its product lineup, always with an emphasis on equipment and technology to help MESA's customers succeed, whether it be new printing technologies, time-saving embroidery machine features, or rhinestone setting machines without external air requirements.